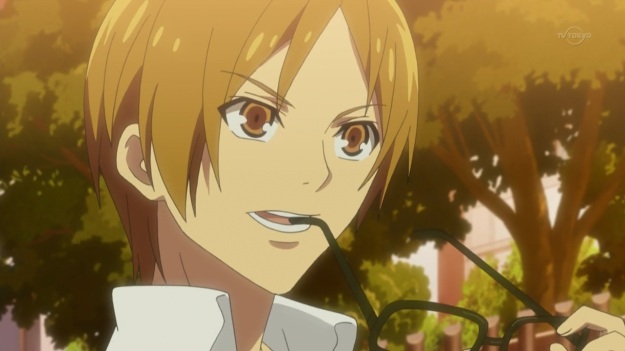 That episode made it pretty obvious who’ll end up with who. At least they managed to keep it blurry for 9 episodes. It’s a nice achievement. There’s always the possibility of it being a red herring though… In other news, I was right about Wakana and Ann knowing each other from a tournament, they fought each other in last year’s Dreaming Session.

Beru did end up going down the way of the jealous girl… I guess I can agree with her that it’s irritating to see Naru and co not taking the tournament seriously, but she wants to crush them so bad they stop tournaments forever. It’s a shame that they did end up using that stereotype, but in a sense, if she’s going into this stereotype now, she’ll have more time to get out of it. Same with Hiro. He’s still the worst kind of scum but he’s bound to change. It turns out he’s only interested in Naru because he thinks Kouji likes her, and he wants to steal everything he gets. I really hope he gets punched or something.

There was no Prism Show this week. In Dear My Future the only episode without a Prism Show was episode 47, the one before Grateful Symphonia started. That episode was really good and had a lot of building up so it’s nice the staff is willing to try it out again. I hope there’s more episodes like that.

After the episode, the official Youtube channel got updated with this video. Apparently it’s a commercial for one of the videos on the DVD of the limited edition of the character cd. It’s Katou Emiri/Naru, Komatsu Mikako/Ito and Serizawa Yuu/Ann visiting a real life prism stone shop. I’m not a big fan of voice actors in general and I’m not the kind of otakus who tries to know the most about them but I wouldn’t mind watching this. The commercial just makes it look so fun. I burst out laughing when Komatsu Mikako put on glasses and imitated Akai Meganee.