All the characters will still be present, plus two new characters and rivals. They’ll probably add a few more later.

I hope they don’t fall into the usual traps of kids shows when starting a new season. The biggest one and the one that feels the most obnoxious is reintroducing every character. I just hope the show keeps going at the pace it is going right now. Episode 43 and 44 were really good. Another one of these traps is making the new characters steal the spotlight for no real reason  other than promoting the arcade game, only for the older cast to overshadow them after a few episodes.  At least they’re not adding a subtitle and it doesn’t seem like they’ll reset the episode count. I just hope the show stays just as fun and refreshing.

One of the new girls will be using a guitar…  This immediately makes me think that they’re trying to surf on Pretty Rhythm Rainbow Live’s popularity and idea with the use of instruments. I just hope that the copying will stop on the visual aspect, and that Aikatsu won’t loose it’s own identity. 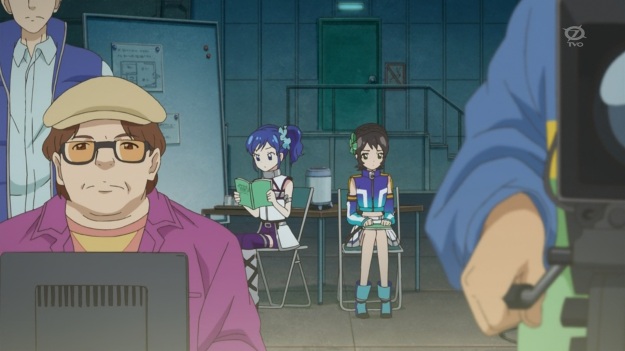 I remember back when Aikatsu started, I immediately recognized the similarities between Pretty Rhythm. Now that I actually watched 44 episodes of Aikatsu, I know they didn’t completely copy on Pretty Rhythm and that only the basic premise was the same. The way both shows feel is very different. Aikatsu turned out into what I’d call a realistic idol slice of life show. They give particular attention to the way an idol actually lives. The auditions, tv ad and drama shooting, interviews, handshake events, and even scandals. They also never forget to show us the staff doing these activities with them, and the most important: the girls’ training. In a few episodes of Aikatsu, you can see Ichigo doing more pushups than you probably ever did in your whole life. This is one of the reason why I say Aikatsu! is one of the most realistic shows I’ve seen. On the other side, Pretty Rhythm is a sports show, developing the characters and dramatic story with each episode, before diving into a climax of awesome.

This would be a good chance for the staff of Aikatsu! to rework the CG as I still think it’s the worst point of the show. Even the CG moves they copied from Pretty Rhythm looks bad in Aikatsu…