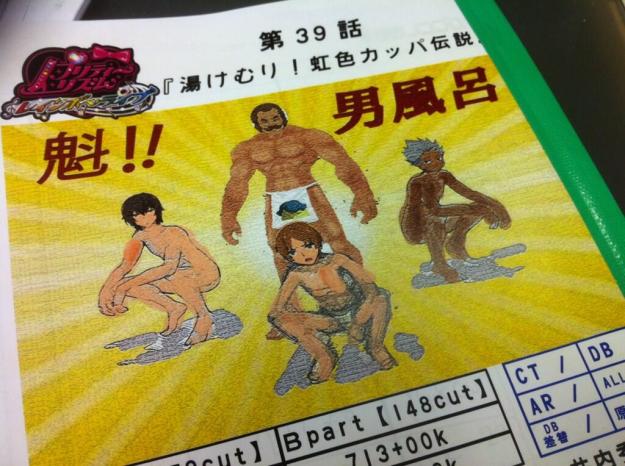 Storyboard illustration cover of episode 39 tweeted by the Director.

Director posted on Twitter some new revelations on Pretty Rhythm’s background.
Post isn’t too long but put the read more to hide the spoilers about Rainbow Live.

Music Collection gets released the 23rd. Don’t forget to order the DX verison if you’re getting it, you’ll get a dvd with the prism shows scenes. There’s the full tracklist in the digest video above.
Athletic Core really isn’t in the Music Collection. 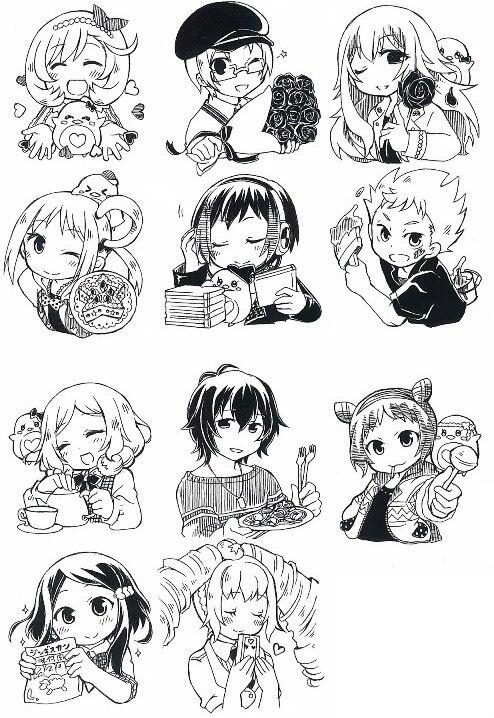 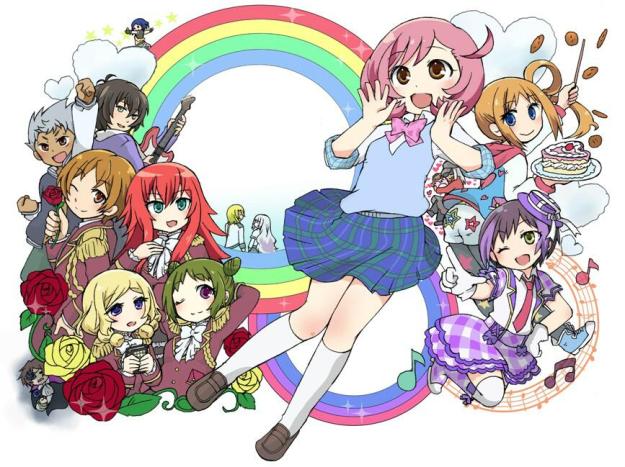 CG Director Otobe Yoshihiro is hyping the full version of the boys prism show and it’s “destructive power”. Read this for info about that. Also he was watching Love Live s2 and said he was jealous of the A-RISE’s dance scene and how he won’t loose and make something even better. (I watched it myself and imo he doesn’t have anything to be jealous about, the CG in Rainbow Live is still way better. Unlike me he’s a CG expert though, so he knows better what he’s talking about)

https://www.youtube.com/watch?v=SJzPC_tff_Q
He also said that the guys working on Love Live used the Aurora Rising’s feathers from Pretty Rhythm for the CG feathers in the ED of Love Live season 2. I know that Love Live ‘s director Kyougoku Takahiko worked on Pretty Rhythm CG for all 3 seasons so they’re acquaintances, and members of Tatsunoko work on Love Live so I guess they lent them the feathers or something.

There’s a radio show with seiyuus these days called A&G NEXT GENERATION Lady Go!!. Among the five participating seiyuus there’s Komatsu Mikako (Marika in Moretsu Pirates, Ito in PRRL, Sei in GBF) and also Ookubo Rumi (Mia in PRDMF, Nobunaga in Sengoku Collection). Each day of the week one of the five seiyuus hosting the show write something on the show’s blog. Some days ago when it was Ookubo Rumi’s turn,  she wrote about how recently she got mistaken for a minor, because of her katyusha hairband. She said it’s the first time someone told her she looks younger than her age that way, and that she learned the importance of katyushas to make yourself look younger.
Maybe I’m wrong on some of the details on this. I’m not a huge fan of female seiyuus in general, and don’t follow their blogs, so I wouldn’t even have knew about this if not for the Director retweeting a Ameba news article about it.

Director : “And here we have a letter from Norizuki Jin: “When they do five consecutive jumps, shouldn’t the judges penalize them because they don’t touch the ground between each jump?!?”
Director answered the question he made up himself, saying that it’s true, but they need to amend the rules, and overlook it, because you can only do more than four jumps by doing it this way.

Director tweeted that the new semester started in schools. So around now, Naru Ann and Ito who became third years in middle school are participating in a junior high school Pretty Rhythm tournament, being part of the prism show club led by Ann. And then maybe they’ll fight the Edel Rose team etc. Thinking of scenarios like this makes him excited.
He also said you should watch PRASS episode 3 to see how much Naru has changed in one year. And also how Bell sounds different at the start of RL and at the end.

He said that because Tomatsu Haruka sounds VERY different voicing Bell at the beginning of the show. Her voice sound more like a generic voice. Like, it’s super bland. You can also hear a bit of the other characters’ voices she did, like Saki in Valvrave. While after 20 episodes or so, when I hear Bell speaking, I hear Bell speaking, not another character she did. While I can still tell it’s Tomatsu Haruka,  she developed an unique tone for Bell.
Speaking of that, notice how during her job interview in episode 1, Bell says “it’s not my dream but rather my goal to beat Amou Juné”. Remember at the end of the show, how she says that at a moment in her life she stopped using the word “dream” ? They sure knew what they were doing with her development, it’s really impressive.

(About the reason why they changed to Naru, he uses the expression 焼き回し/Yaki mawashi, which literally means something already baked. If I Googled correctly it’s an expression to mention something that was copied. Just my own theories:
I don’t think Rainbow Live would have been similar to Aurora Dream or Dear My Future if Ann ended up being the heroine. So he’s probably talking about another show. Maybe Aikatsu?? Ann and Ichigo are both blonde and upbeat genki girls, they’re also both good at cooking so that may be it. In any case An’s personality is the kind of personality every main character has,  An being the MC wouldn’t have been original.MFW not only Aikatsu! killed Pretty Rhythm but it’s (maybe) also Aikatsu!’s fault that Ann and Naru are so under developed characters, because they changed their roles at the last minute. If my assumption is right, it’s sad how they went so far to not be associated with Aikatsu! only for Puri Para later to copy everything from it…)

Next: “Basically, Naru is a girl who never really had freedom, plus she’s been spoiled by her parents since she was little, so she never had something she really wanted to do like a goal or a dream. In that regard, Naru is similar to Harune Aira. However, Aira right from the start is a reliable child, and by the end of Aurora Dream’s first cour she has something like a goal.

(This is even pointed out in episode 1 when Chisato tells Naru “So your dream will be over once you pass this audition?!” As for Aira, while she’s a dojikko, it’s true she’s a more reliable person than Naru, being the eldest among her siblings, she’s dependable.)

Next: “But there’s tons of little girls like Naru right? There’s actually not many people who have dreams or goals and know right away what they want to do. They go with the flow, leave everything to their surroundings, managing to live by like that. How do you raise such a child? I had these father-like feelings when writing Naru.”

Next: “What do you need to do in order to make your children start tidying their own room? I wanted to include this sort of sub theme in the show, how one goes the process of growing up from a child to an adult, if just a little. While I don’t think so myself, the other characters have a lot of impact so some may think it has overshadowed this theme.

Next: “Naru won’t become Prism Queen like Aira. We had decided on this from the start. To tell the truth, back in Aurora Dream, we always thought in our hearts that Aira would become Queen. When the show was airing we’d always think ” but wouldn’t it be better if Aira doesn’t become queen?”
(Of course you’ll make the main girl of your sports shoujo anime win the world tournament at the end! I didn’t imagine they were planning to make Naru loose though. It shows that they had her lack of development in mind, but it doesn’t excuse her lack of development. Basically I’m not gonna say “Naru being underdeveloped is on purpose because she wouldn’t win anyway so the writing is great”. Same as the argument of people saying endless eight is justified because BUT THEY NEEDED TO MAKE YOU UNDERSTAND NAGATO’S SORROW)

Next: “Of course, I never thought that the ending of Aurora Dream should have been different. I thought about it many times and I had always thought it could only end that way. The ordinary girl who becomes Queen, this is the kind of Cinderella story it is after all. But even if Aira didn’t become Queen she would have accomplished her dream. It wasn’t important whether she won the tournament or not. ”
(Aira’s dream by the end of the show was to realize Kyouko’s dream about the Aurora Rising and share her own happiness with everyone, so it definitely wouldn’t have mattered if she won or not)

Next:  I’m not sure about what he said in his first sentence. I think he said that’s the same kind of reaction they wanted to bring out with Naru? That even if she didn’t win she accomplished something? Not sure.
Then: “Naru gained something very very important at the end. Her story was only just beginning at the last episode. This start is very important in life and I would be happy if I managed to teach this to the children watching. But if all the little girls who watched it end up becoming fujoshis then I’m sorry.”
(Really laughed reading that)

Next: (Starting this tweet he was drinking. He said he’ll drink then go to sleep) “I know everyone loves Cinderella stories. I love them too. But you need to think about the meaning of these stories. If the children who watched this show understand this when they’re older, I think they will be able to say there was a meaning behind why we made Rainbow Live. Moreover if some of them end up working in anime it’ll be beneficial to us.”
Lastly, he said that next time he’ll talk about Mia in detail.

To sum it up, I think what he’s saying is that while it was overshadowed by the overall story and others characters, Pretty Rhythm Rainbow Live was also about Naru growing up, and she did had her own development and story. She isn’t a spoiled baby anymore at the end of the show. It’s true there really is a sense of her growing up, with her letting Rinne go.

I don’t have anything in particular to say about PRASS episode 3. Next week it seems like they’ll show DMF episode 46. If that’s really episode 46 this really sucks. It’s one of the last episodes in the show and it spoils tons of things, including two of the best twists in all of Pretty Rhythm and pretty much one of the best twists in anime ever I saw.
I really hope they don’t actually air episode 46 or at least cut some scenes that will spoil.
Really, if you haven’t seen Dear My Future I advise you not to watch All Star Selection to avoid getting spoiled.
In the end it’s just an anime, so I’m not gonna get worked up over this, but this still really suuuuuuuucks…