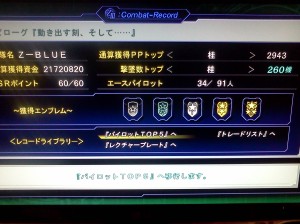 Made me learn quite a lot of kanjis too. I’m surprised at how much easy some of the dialogue is to understand. There’s the typical “we fight to protect peace” speeches which are pretty much 30% of the game’s dialogue, then there’s the jokes which are pretty easy too. Near the beginning, the rugby scene from Fumoffu was even more hilarious than the original thanks to Sousuke calling Ranka a slut.
Gonna do another quick run to complete the scenario chart to get bonuses in Tengoku hen.

Also I’m not a Yukana fan. Well I do like C.C. and Tessa, and Honoka. And Rinslet. And Fujiko. And Dominura too. But it just turned out that way for some reason. C.C. was my favorite support unit. In the top ten I have something like Noriko, Four, Amuro, Crousseau, Chirico and Hibiki at around the same number of kills. I put Noin in the Wing Zero the whole game since I like her.

I was expecting more from the cast list of Z3.2, I’m pretty sad Gravion isn’t coming back. But stuff like Gargantia is nice too. I’m looking forward to some Surfing Lobster Lesbian Pirate Queen and triple Inuzama kick. And some HD Double X and Turn A. In impossible wishes I’d like Lenardo/Belial recrutable and Ledo’s classmates from the Gargantia prequel novel. Hopefully Olson and Athena are playable again too. And Mai and Riia too but that will never happen.