Episode 16 was really nice with that love letter to  sports anime. The tennis part even had the triple replay too. I’m happy they did something simple and straight and didn’t parody. There’s a lot of shows these days trying too hard at parodying and referencing just by namedropping, so it was refreshing. I laughed when they brought out the F1s. I need to watch Cyber Formula someday. This and all the funny stuff in episode 17 too made up for all the boring story reveals.

Probably like a lot of others, I pretty much guessed right everything in my  last post. Even the random “mana is made out of dragons” guess turned to be true. Though I guess it wasn’t really guessing and more deducing since I thought about all this at episode 4, when they already showed us a lot of hints. The only thing I was wrong about was Riza not working with Saramandinay sama and that there would be multiple factions on dragon earth. Kinda suck they went for something super simple instead. 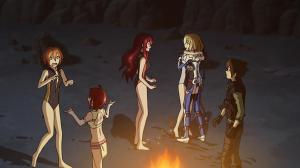 The show is still really funny, and they even put some jokes there at the end with Chris calling the trio attack name lame and Rosalie freaking out at Vivian, but the plot is really predictable now. Salia really did went full MUH EMBRYO SAMA. I really hope it’ll end fast and won’t last till the end, but I honestly don’t think it will sadly. I still think Hilda gonna die, and maybe Tusk too. Salia will survive since she’ll have to atone for going full stupid. I wish Ersha and Chris would have just died instead of getting this idiotic. All of this was so predictable it hurts. I guess the biggest reason I’m disappointed is because I really like Salia and Ersha and they forced them into this stupid role.
I guess now Hilda may get a Ragnamail too and will find back Jill’s ring.
It’s not like the plot is badly written though. All the characters get a fair amount of development too. But it’s just too predictable. If it keeps up like that, seems I’ll only remember the show for the really good comedy and not the story. Would be cool if funny things happened like Emma becoming a pilot. Or the dog. 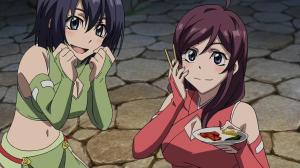 That girl on the right who feed Tusk had a really funny sounding voice. She wasn’t even credited though. Maybe some unpopular seiyuu who’s ever only done random mob characters. 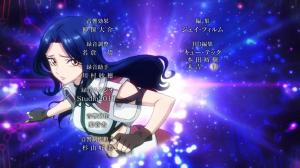 And  seems there’s going to be new characters cool. 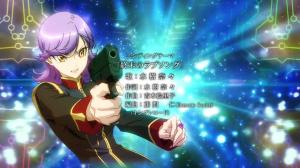 And Irma and Tania, the two girls who got kidnapped and who work with Salia Ersha and Chris may get screen time too if the ED isn’t lying.