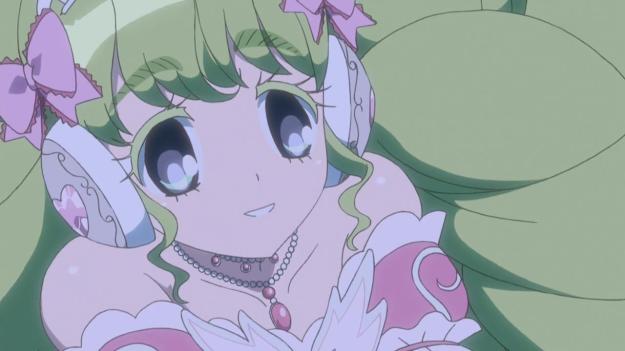 Mai chan and Rika chan girls were cute. They were called Mai and Rika cuz that’s the names of the girls who voiced them and were modelled after them too. ctrl f dreaming girl audition in this post.
One of the reasons I always wanted the show to make people win or loose based on something, was to hear “iine are iine” jokes. Unicorn did it for the first time in the show.

So the ep was rewind.  Just as I thought the show has finally become more interesting they do a rewind ep. Except for Faruru’s “tell me more about you Laala” line, nothing in episode 32’s jikai hinted 33 would be a rewind. It’s like a reverse of the jikai for ep 39 of RL that showed absolutely nothing, so everyone thought ep 39 would be a rewind until the director tweeted it wasn’t. 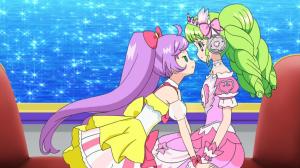 Faruru is literally insensitive.
Maybe I would have laughed to the shiritori joke if the ep wasn’t rewind.
Also Pikachu made Faruru’s making drama. If someone can make one for you they could have made each side character they meet give them a Making Drama. Sophie would have a horror parody themed Making Drama where she’s chased by Sadako. Kimono girl could have given Shion a galaxian explosion Go themed making drama.
Also, since Faruru actually took Shion’s advice and started reading dictionaries in that other ep, even if Faruru herself doesn’t have emotions or whatever, she should still know about them, or what a mom or school or a little sister is. But whatever.

You pretty much can’t skip episode 33 even though it’s rewind, cuz as opposed to a lot of episodes they actually put new info in it, like how people can make you a Making Drama, or that Akaii Meganee and Meganii don’t know anything about Faruru either. (Though Akaii Meganee is lying and just not telling them the truth, she plays her secret final boss Prism Decade destroyer of Prism Worlds role perfectly.)

Faruru is one of the few intelligent enough beings to realize immediately after seeing both versions that Salami Smile Laala = Laala. I really like how Akaneya Himika did weird or loud or masculine sounding Laala voices again, like her KITAAAAAA when Faruru called. It’s fun and and at least seems she’s having fun.

>Takahashi
Must be PriPara world’s notOtoha’s son. NotOtoha registered him at school as Takahashi instead of Takanashi to hide he’s from a rich family. He’s full of himself because he’s rich and turned out to be the complete opposite of notOtoha. 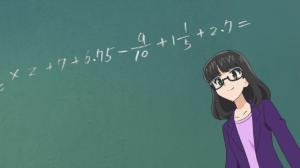 That teacher is cute, and this looks awfully difficult for grade schoolers. Laala’s stupid but still has pretty good idea sometimes, hiding the phone like that.

Non rolling on the bar is totally 100% definitely a DMF reference when Hye In and Mia did it when they were kids. Maybe you’ll see what scene I’m talking about when DMF’s ending gets translated in 2025. 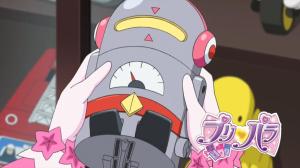 That other ep it was written Sofy, and now it’s Sophy. See, this is why you shouldn’t care how names are spelled outside Japanese. Japanese don’t care themselves. And even if they do, there’s more important things to care about in life anyway. 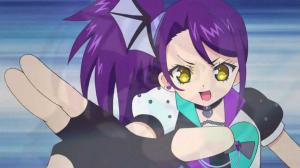 YEAAAAAAAAAH SHIIIOOOOON
I’d like to hang out IRL with Yamakita Saki and ask her to talk in her Shion voice. 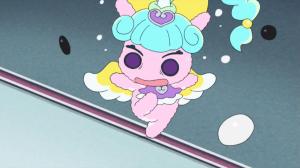 Shion showing once again she’s the best character(with Cosmo) by being the first character to intimidate Pikachu and make him get off his high Ponita. 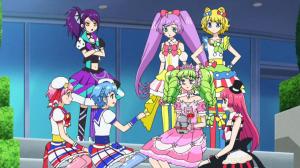 Dorothy is a bad girl 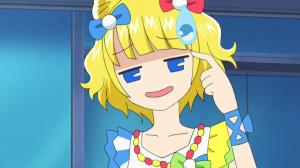 WOW! DEEP INDIRECT FARURU ABUSE! IS THIS HOW THEY’LL TEACH HER HOW TO CRY

Sasuga Mireille. At least she disassembled it correctly. 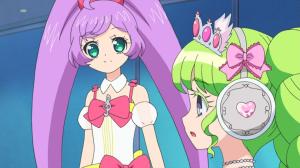 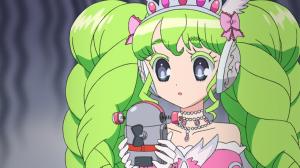 I knew even Mireille wouldn’t be able to repair it. So it didn’t make me laugh. It’s still a funny joke for once though. Faruru saying right after she doesn’t need friends after all was funny too. 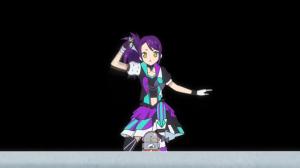 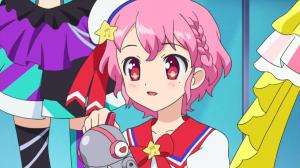 Shion trying to fix it too. They should have totally let her do it. It would have worked for sure. In the end Leona fixed it as I was expecting. And Shion looks so smug in that first pic. Why is Shion so best 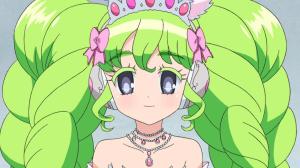 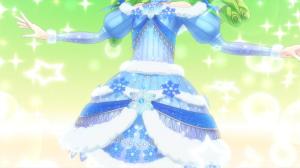 Oh a Faruru transformation scene. And they made her pose like a marionette hung on strings.

Faruru’s snowdress is gaudy bling bling like most of the dresses, but it’s pretty much the only one on which it works. The fact it’s all blue also helps. It’s nice. Would buy for my wife if I get married. 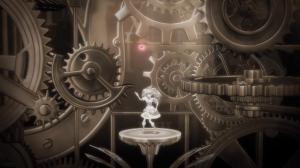 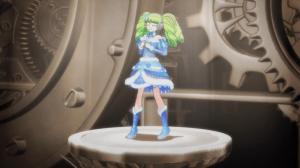 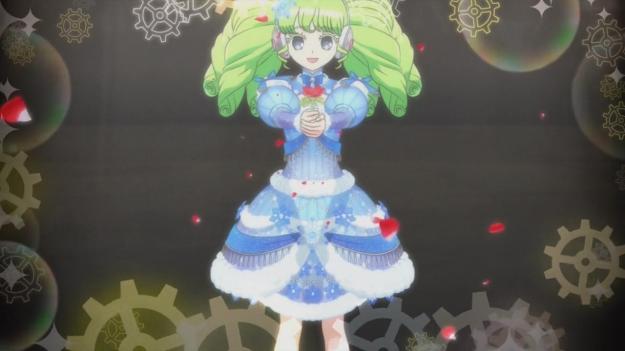 Was a pretty cool Making Drama. Was the first deep meaning one since the time Sophie couldn’t pick up the key. Too bad they recycled the Faruru inside a Faruru idea again for it though. 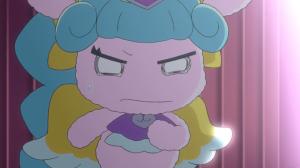 Pikachu’s an idiot so I don’t feel bad for him. Hopefully Faruru abandons him like the trash he is. Maybe he’ll change his ways then.

They’re going to use the definition of a friend they each said as lyrics. So Dorothy is actually gonna say stuff like praise me. This should be fun. 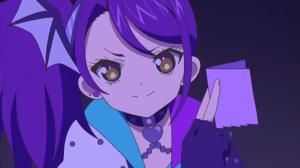 The way Shion gave her sheet of paper in her usual awesome way, Dorothy saying “if Leona’s gonna do it…” or Akaii Meganii going kashkoma were all really nice touches. Small pleasant things you wish they’d do more often. And they’re reforming Iris again. It’ll certainly last until the final episode this time.

Seems Faruru will try to go outside PriPara world once the tournament is over.  Maybe they’ll make a twist, like she disappears if she goes out. Then Laala will make her reappear and give her pizza, and season 1 will end like that.

Episode 34 was pretty good, had funny jokes and plot, I was right thinking the show got better. Things are looking good for the last 4 episodes.  Watching episode 34 was like when you stumble into a manga with an imouto setting or a fantasy harem ln with non japanese words in the synopsis that actually aren’t crap, and makes you think “See, it’s not hard to do something good. Why can’t they all do it? Why every PriPara episode isn’t like that? Why we’re getting Seo Kouji rehashing Suzuka for a third time instead of good things?” One of the reasons is because editors forces same usual story and settings on authors. Mori Kaoru said so at Salon du Livre 2014. Still haven’t wrote a post about it and it’s already gonna be a year soon. Time goes so fast.
(For Doubt!, read it raw or whatever, but avoid Casanova scans at all costs. Their translation is absolutely horrible and messes up the story.)

Mikan is voiced by Watanabe Yui. Never heard of her. She didn’t do many roles and apparently the only show I watched with her is Teekyu.

Aroma is voiced by Makino Yui who’s Sakura in Tsubasa Reservoir Chronicle.
She was also Mio in Needless which has a cool anime adaptation and is one of the best manga of the past decade. 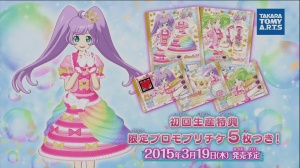 The “3rd Live” third big update of the PriPara arcade game will be in March 19th. One of the pics I found has Faruru changing her hair so maybe she will in the anime too. Maybe some of the new dresses etc will appear in the anime as well.
I like Faruru’s drillcluster hair, but that new look is super mega cute and the blue dress too, hopefully she’ll change to that in the anime. Bottom left on the third pic are further new purichikes that will be in ciao may 2015 next month. They updated the official site for the PriPara 3DS game. You’ll be able to take 3D IRL pics with some of the characters, including Kouji and Kazuki. That’s what the sketches of Matsuura Mai I posted in the previous post were for. And it seems you’ll also be able to take a pic with Jin.
While Hiro is playable in the game, he won’t be able to switch clothes/wear girls clothes. 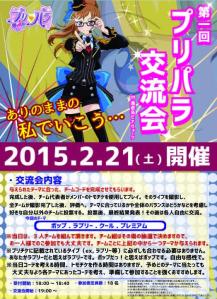 There was an “exchange meeting” organized by fans the night of the 21st.

There’s a time in the arcade game when Cosmo after watching a performance, says that it was hyper great and she already felt a kirameki like this before, but can’t remember where. I wish I had more context, like whose performance she’s talking about. I think she means the player’s and that’s when she comments about you after a performance. Anyway I just want more fuel for my Cosmo dimension slider theory.  Does this means she actually has no memories from when she slides?! 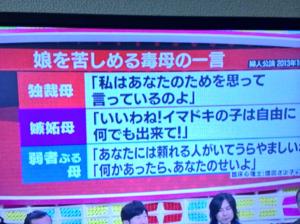 One of these  japanese variety show that makes people watching them stupid had a quiz about moms or whatever, and one of the typical lines of one of the mom types was “I’m doing this for your own good”, the line Bell’s mom used to tell her, and what Bell hilariously said herself to a customer in episode 29 of RL when she becomes manager. Someone tweeted it thinking it was funny.  I found it funny too.

Multiples fans on Twitter noticed there was Penguin Sensei and Momo toys in Faruru’s shelf. At the middle bottom. I didn’t notice it.

If I understood what he said right, CG Director actually wanted to make a CG transforming sequence for Mireille when she wore the prosecutor idol outit in ep 32, but they told him it’s not worth it to do it since it would just be used just for that one time.

Tickets for the first showing of the movie sold out super fast. Pretty Rhythm director said he’ll be there for the first screening event instead of PriPara director because she’s busy working on the show. Apparently PriPara is getting even more and more popular. I really don’t care about sales and rankings and things like that though. I’m not even mad at how PriPara is outselling Pretty Rhythm so much even though it’s not even 10^-3 as good. Just felt like mentioning it since I often see CG director or other staff members retweeting articles about how Poplar PriPara is.