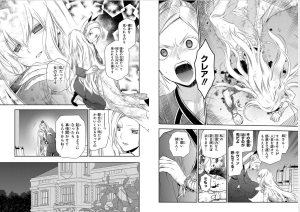 We’re getting a glimpse of what happened to Crea after trying to kill Shelfa and nearly getting killed by Rain. Their battle was quite a few chapters ago, like more than an arc ago actually, so I didn’t think they’d show us this. Turns out they’re doing it to explain what Crea and her faction’s deal is about.

Seems Crea has huge auto regen like most of the strongest characters, despite having a hole in her chest she recovered after only sleeping a day or two.But if Rain had got her heart she would’ve died, so it’s not like she’s invincible either.

Actual reveals won’t be till next chapter and nothing much happened this time. They’re hinting and building towards things for a while now. While Crea herself only fought for the first time some chapters ago, her faction is iirc one of the first antagonists introduced in the story, and yet we still don’t know anything about them. Besides being “religious fanatics” and how they believe Crea hears voices from some god while she herself said it’s not as good as it seems and it sucks. Seems she’s forced to hunt demons like Shelfa because of it.  They’re also starting to hint at Talma doing something. Talma is more and more worried about Crea, her being her only sister, so it seems she might try to stop her one day. At least for now they won’t go after Shelfa/Rain anymore. Anyway looking forward to what’ll happen next. Judging from the chapter titles, we’re currently at volume 9 of the novel, but I think some events happened in disorder so not sure how accurate it is, not reading the novel.