There’s a “movie” tab which gives an error for now, I guess they’ll release a PV soon.

The actual director of the stage play is someone called 宇治川まさなり (not sure how his name is read). Seems he directed many other stage plays in the past like the Yowamushi Pedal stage play, or the Sengoku BASARA vs Devil May Cry stage play (yeah, I didn’t know this existed either, I want to see that).

They haven’t said for now whether it’ll be a completely new story or using the story from the movies. I don’t think it’ll be a new story. I think it’ll mostly be the first movie, with maybe a few changes.

When it was announced, director tweeted “please support Butakin”. He’s abbreviating the stage play as butai + Kinpri = Butakin. In the past he’s also the one who coined the “Kinpri” abbreviation for KING OF PRISM by PrettyRhythm and the “Kinpra” abbreviation for KING OF PRISM -PRIDE the HERO-, though I mostly use Kinpri2 instead of Kinpra, so it’s easier to get for people not familiar with Pretty Rhythm.
Some people told him to change the abbreviation but I hope it’ll stay this way. In any case I’ll keep calling it Butakin myself because this is so funny.

Sound Director Nagasaki Yukio said it’s been a while he’s been this surprised about an announcement.

Old time Pretty Rhythm fanartist Siokya san explained it’s because Director loves it when everyone uses an unique abbreviation so it sticks out during searches, so it’s easier for him to see people’s reactions. So Siokya said he’ll purposely use the emotes

to talk about the stage play,  to make it harder for director to search for it haha. Some other old times fans really like the Butakin abbreviation as well and will keep using it alongside with the emote version.

Minako san saying it’s possible well’ get a Stage play with the girls one day and a DMF Grateful Symphonia stage play. 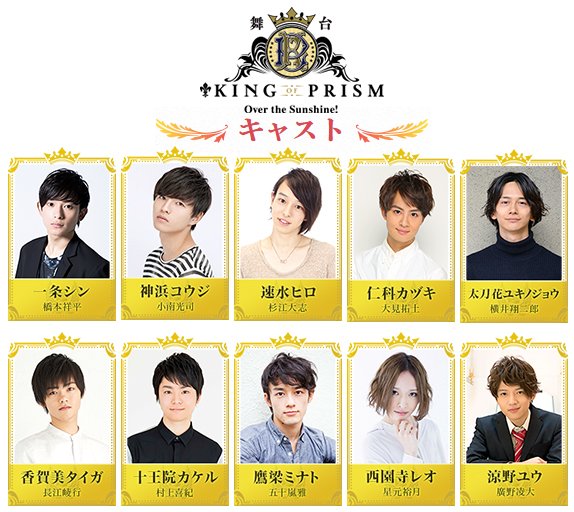 All the characters are played by different people than their seiyuu.

A fan made a listof the age and height of the actors, to compare it with the characters’

Except for Minato, who will be played by his seiyuu Igarashi Masashi. As you can see on his profile, he did many stage play roles in the past so he’ll definitely do a great job.

Soon after the announcement, Igarashi tweeted “If not for Kinpri, I wouldn’t have got the opportunity to be in such a stage play again”, that he’ll try to spread the prism sparkle with this stage play which can be considered in a sense 2.5D. And he said “The only one who can act Minato, IS ME!!” referencing Hiro’s line in Pretty Rhythm Rainbow Live episode 18. Made me laugh a lot.

Enoki Azusa/Mion tweeted she’s happy Kinpri is getting a stage play, and that she knows Shin’s actor, she did the Bakumatsu Ookami Kick stage play with him.

It seems Tsubota Fumi isn’t working on Kinbuta. Would have been perfect if she helped with the scripts, as before writing for Pretty Rhythm, she used to write theater pieces, hence why she greatly contributed to making the Grateful Symphonia theater like episodes at the end of DMF.

Also, if you’ve been reading my blog for at least a year, you should already know that Koreans fans made their own fan stage play of Kinpri 1 at a convention. Director even retweeted it back when they put it on Youtube. I hope the official one will be at least as good as this.

The official KING OF PRISM Twitter is about to reach 60K followers, they'll give out Twitter avatars to celebratehttps://t.co/R9rK1WkzDr

Lastly, as always, I’m still saving info from the ongoing stage greetings, eagerly waiting for the KING OF PRISM -PRIDE the HERO- DVD release so I’ll finally be able to read all the new background info and translate&publish it.