The Fall anime season gonna start soon.Of course, you can get a rough estimate from the information, the original material if there’s one, the staff (The FULL staff, not only the director )etc but they stay estimates, first impressions. You can’t know the quality of a show until it aired and you’ve seen it for yourself. Even the upcoming Fate/Zero,  surely looks totally awesome but, maybe it will suck. The possibility is never 0%.

It amaze me so much when someone say “this show is crap/BEST SHOW OF THE SEASON” after seeing one or two episodes, are they wizards? Of course I’m not saying first impressions (or recommendations if the show aired already) are always wrong, but they’re still first impressions. (As for recommendations, everyone got different tastes). I’m not saying Season Previews are wrong, I’m just saying people should shut their mouth if they don’t know what they’re talking about. A simple rule of life.

So I watched Kamisama Dolls’s first episode. The story was ab-

Hahaha who am I kidding? This isn’t going down like this. This isn’t an anime blog. (I sure hope so).
I sure sound arrogant when saying this while I’m not really.

The thing that got my attention is how it opens with university students at a party. I like this scene, not because of the scene itself (though main guy singing LINDA LINDA was awesome), but because of the current online anime community ( well at least the English speaking one).
Please, allow me to explain: I’d bet my lunch someone said while blogging this show or talking about it or whatever:
“University students! Drinking beer!! Since when have I seen this in anime?”

The first thing that comes to my mind is pitying the guy. My second thought is wondering if he/she was serious or only said it to sound cool, or both.
Long story short, my point is unless you’re an “anime fan” since less than five years ago or/and got brainwashed by things like “anime these days is moe crap”, you shouldn’t be saying things like this…
You should know that there isn’t only “moe” shows.
You should know that there isn’t only anime with high school students, etc etc.
And you should know you’re not forced to only watch airing shows.

Back to the show itself, I don’t have any problems with anything right now and I liked this first episode. Except for the little sister which I find annoying, and the story looks generic to me but I don’t have a problem with that if it’s done right. It’s funny how I don’t like most kids both in real life and anime. I bet she will die to put some shock on the main guy or will suffer a lot. 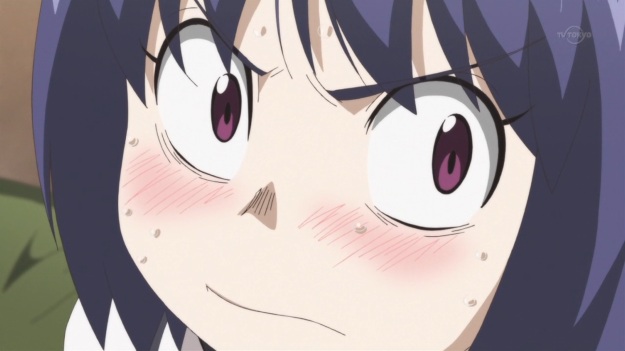 I like the op & ed a lot by Ishikawa Chiaki. PETO BOTORU.
I guess what I just wrote could be called “my first impressions” about the show I guess. That’s what animeblogs do though. Urgh.
Just in case, I do not have some burning hate against anime blogs or anything, I just don’t like doing what someone else is doing already. Especially if they’re doing it wonderfully, like, RandomC in my opinion

I turn on the tv, and woah 9/11 documentaries, talk shows, random crap, Everywhere. Well except on Nolife.
Cmon we’re the 10th!! (see title, I’m no time traveler) we’re not even the eleventh yet… Don’t they have anything more interesting to talk about? I dunno, I think there’s still stuff going down over at that Fukushima nuclear plant, or all these guys who still demonstrate in Syria everyday and still get killed everyday. Nope. No one gives a cent.

I actually wonder if they didn’t talk about 9/11 all week long because it was on a Sunday this year, and less people watch tv on Sunday so they had to spam us with it beforehand.

I always wanted to do posts about artists I like but I don’t have Choux’s skills. So I thought I’d bet on originality. Never thought I’d start with this guy. Guess it’s because he doesn’t need much effort. And yes I’d rather just copy pasta his/her name than trust Googletrans as I don’t read moonrunes.

You know that K-on! tourist town in Japan which got K-on! furniture everywhere, including funny looking signboards? If not go read this. (The signboards in question are featured in the 2nd part of the article).

Well this artist here draws characters the same way. I actually wonder if he’s the one who designed the signs in the first place or if he’s just imitating them.