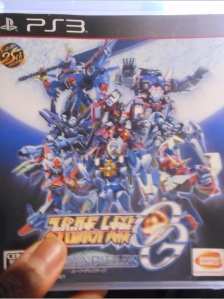 Finally got this after a year. Can’t buy too many games at release when you’re a poorfag.

Bought the PS3 Japanese version since I don’t have a PS4. From what I’ve seen, the English translation of the PS4 SEA version is very bad grammatically speaking, but they managed to get most plot information correctly and there’s no misinterpretation.
Thanks to this if there’s something I don’t understand while playing the game in Japanese I’ll check people’s videos of the English version.

I heard some months ago they patched the game, translating the summaries of the past OG games too. I hope they did a good job. That way it’ll contribute to having better accurate info of SRW OG story in English.

Feels weird I’ll finally get to see how Raftclanz looks like in 3d animation.Well, unless I die before playing the stage where EKUSUTORAKUTA, MAKISHIMAMU! happens. Though if I die and manage to go to paradise I’ll see it anyway. Waited so long for this. I purposely didn’t watch most of the new units appearing in OGMD’s animations on Youtube so I can discover while playing.

It’s also the first time a SRW game I already played and finished is getting into OG. I played 4 and Alpha 1 on Alpha 1 on Dreamcast but didn’t finish them before playing OG1 on GBA.

SRW J got a special place in my game related memories since it’s what also made me discover a show that joined my list of favorites shows ever: Tekkaman Blade. (though technically I played W before, and saw it first in W, not J).

Also looking forward to Haken being in. Haven’t played Project X Zone 1 so haven’t him for years. Speaking  of which, I wonder if there will ever be another “Namco X Capcom”-like now that the games’ director, Morizumi, left Monolith Soft. I haven’t played PxZ 1 nor 2, but I guess Reiji and Xiamu’s story is over now. Starting with Namco x Capcom, then Mugen no Frontier, Mugen no Frontier EXCEED, and then PxZ 1&2. That’s 5 games in total.  Would be nice if the other Mugen no Frontier characters got in OG as well. And the Masoukishin ones too. (Especially Circuit kun and Elisha, I’m sure they’ll put int at least those two)