Previous episodes can be found on this page. Look for “Pretty All Friends”.

I’ll try to add comments soon. I have a lot to say and didn’t finish writing them yet. I’ll notify on Twitter when I add the comments.

Update on March 24,2019: I added my comments at the end, explaining what I thought about the episode and why Oto is written pretty badly especially. The comments include spoilers for DMF and RL. I don’t think anyone interested in Pretty All Friends’ dumb weirdness didn’t already watch all Pretty Rhythm though.

Pretty All Friends Episode 7: The Fairytale Country and the prince of the Lost Woods.

END_OF_DOCUMENT_TOKEN_TO_BE_REPLACED

Previous episodes can be found on this page. Look for “Pretty All Friends”.

END_OF_DOCUMENT_TOKEN_TO_BE_REPLACED

Previous episodes can be found on this page. Just ctrl+ f Pretty All Friends.

Episode 5: The Best Friends’ Promise on a Rainy Day

END_OF_DOCUMENT_TOKEN_TO_BE_REPLACED 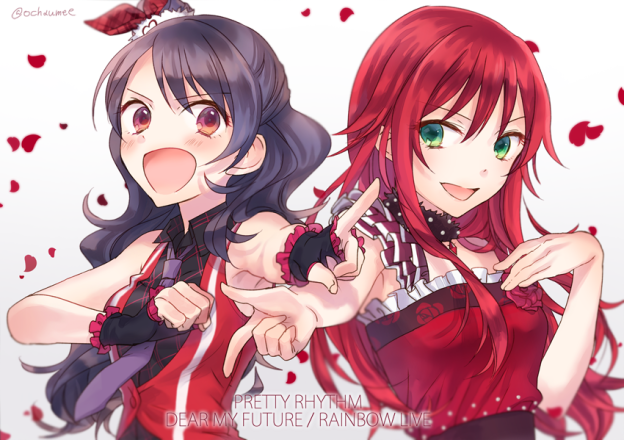 You can find all previous posts and translations on this page.

It’s been so long since the last post that even if I bookmark and write down and save everything I want to talk about, there may be things I forgot to put in this post.

I also didn’t go through all of director tweets from June 2016 to now. I check  his tweets almost daily, but I usually check everything he tweeted between each post I did, in case I missed anything important. Didn’t do it this time, it’ll take me too much time.

From June to September 2016, nothing too big happened except the announcement of KING OF PRISM -PRIDE the HERO-. From September to December 2016, I was playing Persona 5 during my free time. Since January 2017 I’ve also been busy with others things. That’s why it’s been almost a year since the last general news post, and there’s some things I wrote in this post which are almost one year old. However, from September 2016 to now, I did write posts whenever something big happened, on here and on twitter, so I’ll just link these. This means there’s a lot of embedded tweets in this post. It’s the first time I do this, there’s some tweets that don’t display and I don’t know how to resize embedded tweets. Hopefully it doesn’t turn out weird and people with toasters can still read this post.

You can find my Twitter here. I try to report Pretty Rhythm news as soon as I can on twitter. A Wordpress blog like this isn’t the best way to be “popular” in 2017, and it would be “better” to post all the news on Twitter or another social media. I don’t want to do it though, as twitter is bad for writing good things and keeping track of information. I prefer my current way of doing things, with these news posts.

Nowadays, there’s multiple blogs, Tumblr pages like this one that covers a lot of Pretty Rhythm things, some of which I also cover in this post. It even has translations too. For example, if you’re keeping track of magazine releases, it’s much better than my blog since with the tumblr system they can make a new post whenever a magazine containing Pretty Rhythm material is announced, without clogging their post history.
Edit: There’s this tumblr too that posts new Pretty Rhythm news very fast and sometimes posts summaries of stuff in magazines as well, forgot to include it.

If you want to know magazines releases with Pretty Rhythm material ASAP, you should follow that tumblr or follow those magazines directly on twitter. I’m only interested in the magazines for the interviews and short stories.The magazine release list I do in my post is primarily for myself so I’ll easily know what to buy if I ever have tons of money to spend.

I’m not anymore the only person regularly reporting Pretty Rhythm news in English, but it won’t change my way of doing things. I won’t try to be more “competitive” because in the first place, I’m looking for news and reporting them because I want to know them myself, not because ANN or other sites didn’t report them. So I’ll naturally post about things I haven’t seen on other sites, at least the ones I check. While I do jokingly say “hey look, ANN didn’t report this” from time to time, pointing fingers at them isn’t actually my goal. If there’s something Pretty Rhythm related which is unreported in ANN or Crunchyroll or other blogs,  I’l try my best to find it, because I’m doing it for myself first, and put it here to share. So in the end it’s not like I’ll be putting in more effort or try to do some competition. I hope what I’m saying isn’t too confusing and my point is getting across.

I’m happy more people are into Pretty Rhythm now. I hope one day there will be a very reliable and complete source of Pretty Rhythm info in English, that way I’ll be able to stop doing these posts.

Thinking about it now, when I started covering Pretty Rhythm, if I was evil and a 12 years old kid I could have even made money out of this. By starting a forum and monopolizing the Pretty Rhythm English fandom, writing rants on social media about how any other forum or fandom is “illegitimate”, swindling people into paying me for translations, swindling kids with tons of free time and with Japanese knowledge into helping me(Japanese Americans from Hawaii for example), etc.  I’m not sure how to explain it but you should get what I mean if you’ve been on the internet for a few years. I’m very happy I didn’t turn like that and none of this happened, as it would mean I’d be a scumbag.