if you haven’t read it yet, here’s the article with my impressions on the first G-Reco compilation movie and the July 5 Q&A.

You can find other Tomino related events or interviews I translated in the past on this page.

Director Tomino held an around 30 minutes long Q&A on July 6, the third day of Japan Expo 2019. When he stepped on stage along with the MC and the translator, they explained how this was supposed to be a panel. What happened is, Tomino told Japan Expo’s staff beforehand how it’s his first time visiting France, so he doesn’t feel like talking about himself or his career, etc. Instead, he wanted to hear the audience speak. He wanted to hear our opinions on his works, answer our questions and chat with us. So they decided on holding a Q&A instead.

There were so many questions, I wouldn’t have been able to listen to all the answers if I concentrated on taking notes. So I just wrote down everything in my head. As such it’s possible I forgot certain parts or merged certain answers together. And I’ll update the post if I remember more.

END_OF_DOCUMENT_TOKEN_TO_BE_REPLACED

(Needless to say, the feature image is a screen from the TV series version. I like Ringo a lot, though that doesn’t mean anything in a series where every character is awesome)

The first G Reco compilation movie had its world premiere at Japan Expo 2019 on July 5. Director Tomino Yoshiyuki also participated in a Q&A after the movie. He answered questions from the audience and revealed more on the upcoming movies.

Note that there’s another panel with Director Tomino happening on July 6 which I’m planning to cover as well.

END_OF_DOCUMENT_TOKEN_TO_BE_REPLACED

Interview was published by Comic Natalie at the end of June 2018. The boxes released on June 22nd 2018. I don’t really have anything to say besides that as always Tomino is too harsh on his own works. G Reco is one of my favorite show of the decade, and my favorite recent Gundam show with GBF, so looking forward to the movies. The part at the end about SHOWROOM & ZOZOTOWN got RT a lot by Japanese people I follow, which is how I first saw this interview. I only ended up reading it now though, and I thought I might as well translate it and share it. It’s my Eid present to everyone I guess.

END_OF_DOCUMENT_TOKEN_TO_BE_REPLACED 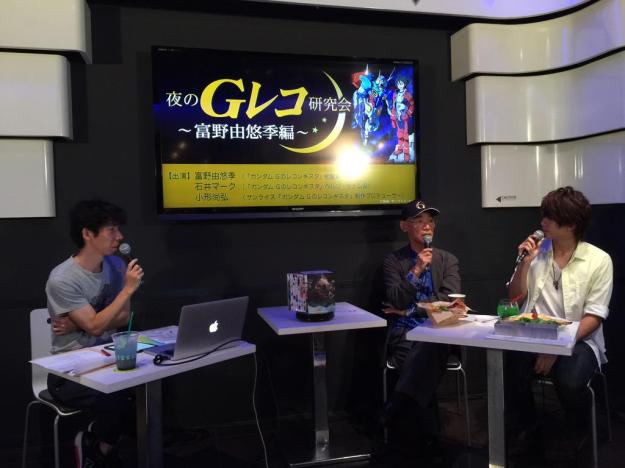 The G Reco cap that Tomino worn during the event won’t be commercialized.

I edited the post as I added more tweets and found a partial transcription here. It’s by Inuyou, a nice person who often drew Mouretsu Pirates pics when the show was airing.I think I covered everything I could find now.

Tomino was invited the 27th of August 2015 at the Gundam Café for an event. The  Sunrise producer of G Reco, Ogata Naohiro(nicknamed Ogata P) was present along with Bell’s seiyuu Ishii Mark. Yoshida Kenichi was supposed to attend too but he had last minute circumstances. They talked about Gundam in general. It was streamed online but it was blocked outside Japan so I didn’t watch it. On twitter #Gレコ, there’s some impressions and quotes by Tomino picked by people who watched the event. I mainly picked stuff from this account. Instead of going through the twitter tag, you can also find all the related tweets on matome sites like here. I’m too lazy to link every single tweet I translated.

END_OF_DOCUMENT_TOKEN_TO_BE_REPLACED

Back in June, Nolife did a special gundam night, talking about the various aspect of the franchise: shows, games, figurines etc. Nolife exists for 8 years now. It’s the only French channel I watch regularly for years now. There’s only crap on tv now. It’s either reality shows, tv shows with the episodes not airing chronologically, retarded debates brewing racism, and crappy anime, Japanese or not. While the dubs almost always suck, there used to be a lot of different jp anime airing till five years ago or so.

Without even speaking of the history of France with anime and how we’re the nonJapanese anime master race with Italy, around 15 years ago now, in a span of a few years, one channel aired Evangelion, Escaflowne, FMA, Excel Saga, GTO, Monster, Samurai Champloo (only one year after it aired in japan or even less) and more. There was tons of other anime on other channels too. Though the dubs sucked most of the time,it was still cool. Gankustuou even aired on tv here too, cuz muh Monte-Cristo French culture. Then around 3 years ago, I don’t know what happened, but now every channel only airs either Naruto or Fairy Tail. There’s still that one channel reairing old anime from 25+ years ago, but besides Nolife no one airs anime different than ultra popular things now. (Without counting children anime in the mornings like the new Beyblade and the occasional rebroadcast of Princess Sarah,Heidi,Attacker You, etc)

Almost every new French produced anime sucks too. Wakfudofus anime are apparently good but I never watched them. The new Taiyou no Ko Esteban series sucked.  Then there’s Marathon who used to do good shows like Totally Spies or Martin Mystère, but now they do crap like Lolirock: A multimedia show copying Sailor Moon and Purikyua and mixing it with music. Even Jem and the holograms was better than this. Don’t watch Lolirock if you value yourself.

Anyway, Nolife did a Gundam night and since they actually aired G Reco.

I was busy, so I only watched all of it now. They also managed to interview Tomino and Yoshida, as in Nolife themselves,  not some interview from another source. I summarized what they say since it’s interesting.